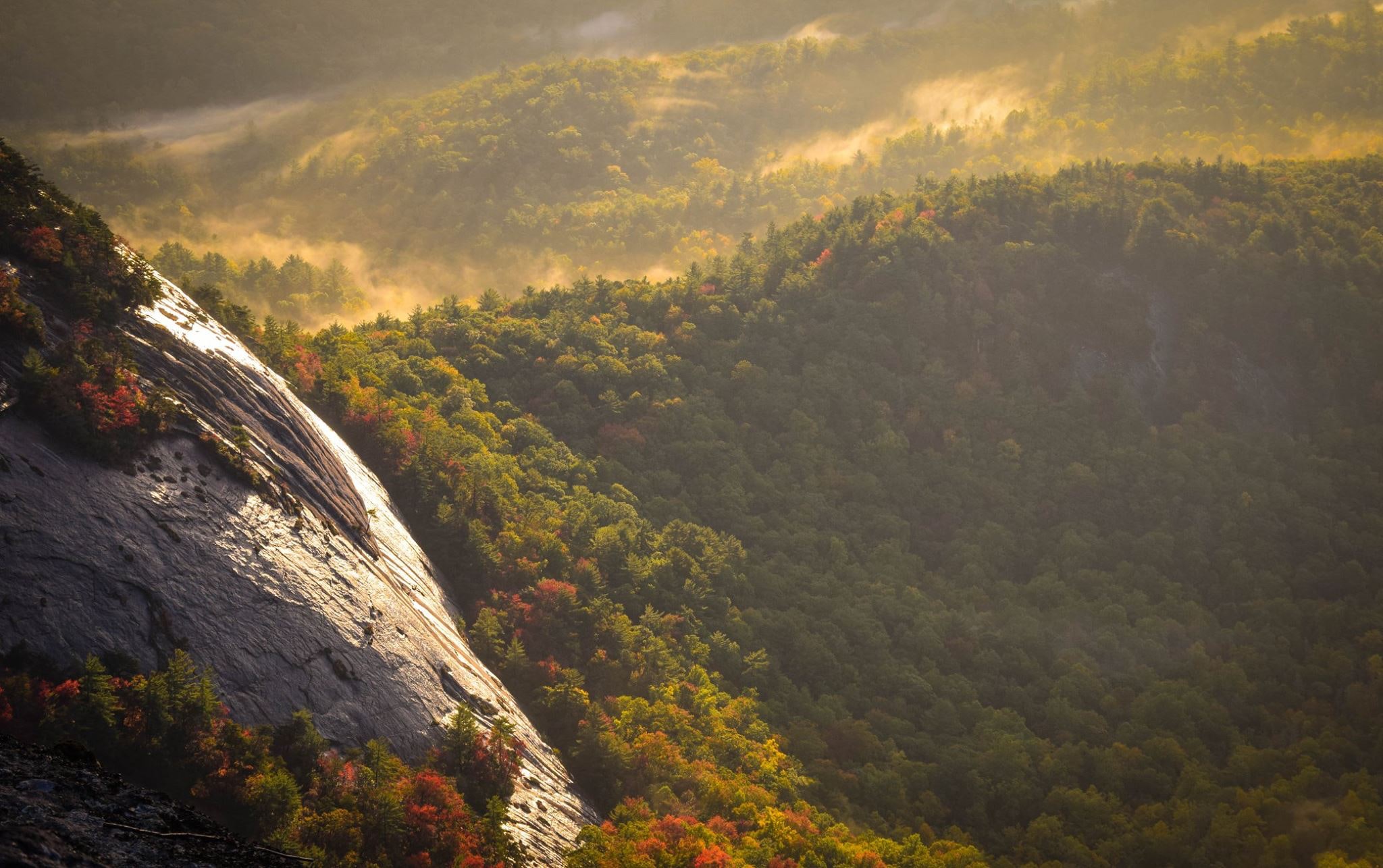 For our birthdays one year, my former partner and I decided we would go on a mini-retreat away from the clatter of the city. We found this incredible Buddhist monastery upstate called Kadampa. Nestled near the Delaware River Gap, the Kadampa Center is dotted with unique structures amidst a lush wooded landscape. The arch of fall colors was at it’s apex when we arrived, deep red and burnt orange leaves were flecked with yellow and green. Moss was everywhere; it covered the forest floor and the stone walls that were sewn alongside the property boundaries. With 82 acres of peace and quiet, we lost ourselves as we walked through meadows, over brooks, and onto rock cliff lookouts. The food was glorious; fresh, vegetarian, and authentically Indian. Our room faced two separate wooded areas, and was humbly furnished—though not at all dismal. A cheerful yellow comforter kept us cozy, the wood floors warmed the room with a grounded glow.

Before we left, we attended a ceremony entitled “Prayers for World Peace.” It was one of the most beautiful services I’ve attended in awhile; first because the lead monk’s wisdom and love filled the room, secondly because the temple itself is ornate and filled with symbolism. I learned two lessons that had stayed with me since; they are the real reason I felt compelled to write this post.

The monk spoke of prosperity and true abundance…well, actually he surprisingly started off by talking about Wal-Mart. He described how we go and fill our carts with the stuff we think is going to give us happiness and freedom. In essence, we “treasure” our stuff. Right when I thought he was going to begin a cliche lecture of criticizing consumerism and capitalism, he said some things that I had never heard before and that I found to be quite profound. In speaking of abundance, he said that the true treasure lies in every human being.

“Imagine if you woke up in a world where there were no other humans…but every material thing you could ever want?”

With that, he explained how other people are our true treasure, because they give us an opportunity to be compassionate, and to ultimately reach enlightenment. When we approach every person in this way, we see them as a gift. Every person that we meet provides us with an opportunity to open our hearts. And then he said something that has changed my life since I’ve heard it: “You are important. Your happiness and freedom are important”. These words flowed into me, clear as a cut crystal river. These words are not intended for aggrandizing ourselves or for boosting our ego. These are the words, he said, that we should keep in our heart when we deal with others.

Your happiness and freedom are important.

When he referenced happiness, he didn’t mean the impermanent type that we acquire from accomplishments, material gain, or even relationships. He meant happiness as a form of peace. The peace of mind of someone who is not suffering. And when he used the word freedom, he didn’t mean the freedom to let our ego run wild, or go to Wal-mart and grab anything we want, or the freedom to skip out on our day job and fly to Bali (although that would be nice, wouldn’t it?). He meant freedom from suffering.
And when he said “You”, he didn’t mean “I” or “me”. He meant the person that we are speaking with.
Why he chose to utilize this pronoun instead of “he” or “she” is not something he explained, but something tells me that it has to do with making sure we are connected when we repeat this mantra in our head. As well, I feel that when we silently feel this mantra out, we are projecting the energy behind the words out at the person we are speaking to.

After our beautiful retreat, I went to work that week and tried this out on everyone I interacted with, even some folks on the subway, and in the street. Anytime I made eye contact with someone or spoke with them, I silently said this mantra: You are important. Your happiness and freedom are important. The reverence that came about inside of me is hard to explain. My first reaction was that I felt truly humbled every time I interacted with another human being. The mantra took me completely out of myself and any self-centered thoughts or feelings I was harboring; from not wanting to be bothered at work to feeling territorial while standing on a line. My second reaction was an opening; like I was allowing something other than the immediate physical situation to exist. It was as though the true reason for the interaction lived and breathed between myself and this other being–sometimes that reason was just being to experience compassion and connectedness with one another. Something about really acknowledging someone else’s importance- not entitlement or superiority–but their great importance and divine path in this world (which Eckart Tolle would say is to allow the universe to know itself; a deeply important reason for existing indeed), is not only illuminating, it’s even strangely comforting. The act of repeating this mantra, for me, generated a feeling of love and compassion for every person I came across, and altered my experience to one that felt truer to a Buddha or Tara nature, rather than letting the ego run the show.

Since this had such a profound effect on me, I wanted to share this with you. I invite you to try it for a day or two, perhaps more, and witness how it makes you feel.

With tremendous love and respect,